Santa Fe is not just the oldest capital city in the US, in our opinion it is also one of the most interesting and beautiful. Long before Spanish colonists founded the City of Holy Faith in 1607, the Indigenous Tewa Peoples who lived in the area called it Oga Po’geh, the “White Shell Water Place.” The ruins of a Pueblo settlement dating back to 900 AD lie buried beneath what is now downtown. Reflecting a later migration, the still-visible wagon tracks of the Old Santa Fe Trail run right to the edge of town. This rich tapestry of history, culture and architecture, combined with abundant outdoor activities, are a big part of why the LongView team has chosen to call Santa Fe home as well as the base for our sustainable investment advisory practice.

In this context we are very proud to have received recognition last month for our efforts to preserve a small piece of our city's history.

In 2018 LongView’s principals, David Cantor and Harlan Flint, formed Grant Avenue Partners to purchase the landmark 1851 Hovey House on Grant Avenue, just blocks from the Plaza. A painstaking, year-long renovation ensued to restore the building to its original beauty while thoroughly modernizing its infrastructure to make it a suitable home for LongView’s new downtown office.

This May we were honored to be the 2022 recipients of the Historic Santa Fe Foundation’s Architectural Stewardship Award “for the preservation, restoration, and sensitive remodel of the Oliver P. Hovey House.” 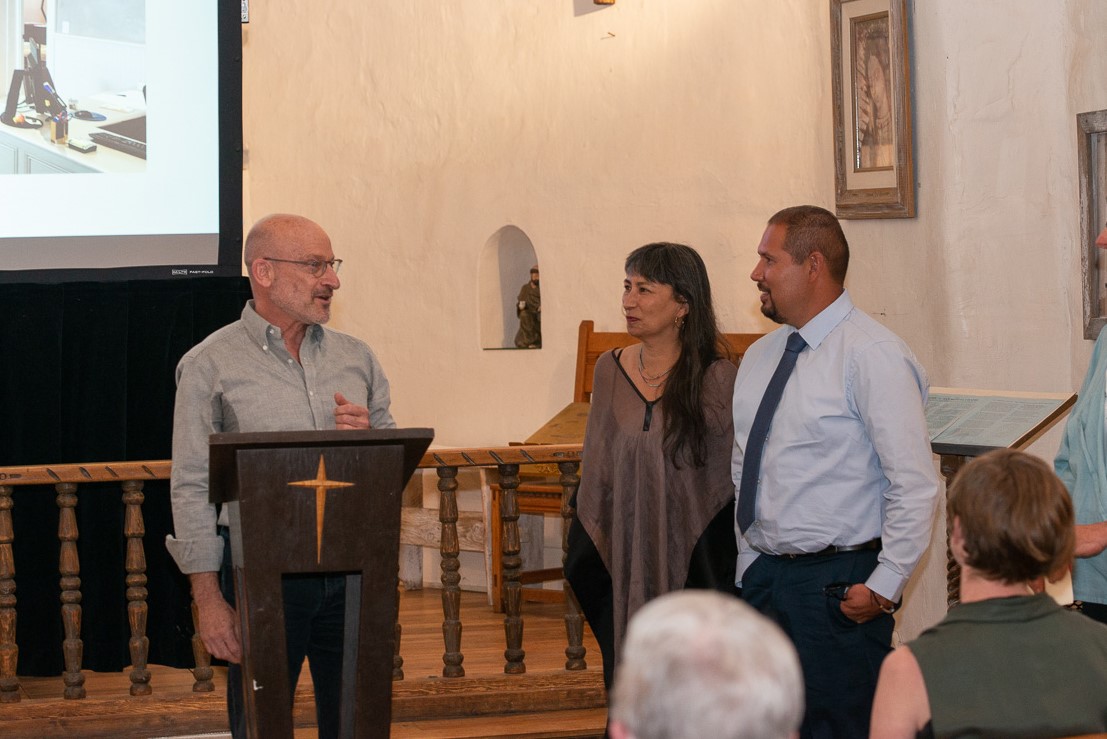 David, joined by the project’s contractor Luis Mingura and designer/decorative painter Sydney Cooper, accepted the award at a ceremony in the historic Guadalupe Chapel. Anne Culp, the board Chair of the Historic Santa Fe Foundation, presented the award. The Foundation’s website notes that “The meticulous efforts in maintaining the integrity of this significant building in Santa Fe, while repurposing it as modern office space, are a testament to the importance of preservation to the continuity of history, hand in hand with business opportunity and growth.”

Vermont printer Oliver Hovey built the house in 1851 after making the long journey West and marrying into one of Santa Fe’s most notable Spanish families. Hovey wanted to make his new abode as impressive as possible, so he designed the single story home with large windows, fireplaces in every room and 14 foot ceilings—almost twice the height of traditional adobe homes. At the front of the house he planted a large garden. In a nostalgic nod to the style of the architecture he’d left behind, he painted the exterior mud stucco to look like red brick, a building material that was popular on the East Coast at the time but was impossible to find in pre-railroad era New Mexico. That red brick design exists to this day, masking the massive double adobe walls behind it.

As a Santa Fe resident Hovey founded New Mexico’s first English-language newspaper, and later went on to represent the city in the Territorial House of Representatives. In following decades other notable residents of the building included the president of The First Santa Fe National Bank, a Chief Justice of the NM Supreme Court, and Grace Bowman, one of the city’s leading businesswomen in the 1920s and ‘30s.

The Santa Fe Ghost Tour includes a stop at Hovey House, where the guide recounts the rumored apparitions of a long-ago female resident. So far, she has not appeared to any of us during office hours.

Keeping his attention on the here and now, David noted at the award ceremony: “The opportunity to preserve and enhance a building of this quality, and do it with an eye to sustainability, was a real privilege. We feel incredibly lucky to have such a beautiful space for LongView’s offices.”

With much appreciation to our contractor, design team, skilled workers and artisans who made this project such a success, we look forward to hosting LongView’s friends and clients here for many years to come.